On the 8th May 2015, between delayed flights due to the Yemen war, Emirates landed in Madrid 8:25pm.  My night bus ride left for Logrono at 1:15am and arrived at 5:00am in darkness with me being very car sick from the various bends  on the road. At 6:45 I left for Najera.  My walk from the bus terminal to the Albergue de la Asociasion de Amigos del Camino de Najera ( being a donativo albergue), was such a pleasant surprise all along the river and surrounding hills of this beautiful little town.
I arrived at the Albergue just when the last pilgrims left and introduced myself as the new hospitalera from S.A:- "hola, hola! Coma esta! Soy Anna Kapp" I said. Well, that made them think this one could speak Spanish and off they go with Gara-Gara-Gara, (my version of their fast speaking Spanish), I was shocked out of my tiredness.
"No entiendo Mama Mia!! Mariano (old guy) through up his arms. All 4 hospitalero's (Mariano, Antonia, Vladimer and Maria) looked disgusted turned around and left me standing there.  Maria came back, took me to our cubicle with just a double bunk bed, cramped with her stuff all over the place, said I sleep on top and that she keeps the key around her neck till she leaves in 4 days. No problem, I was there to do a job.
I volunteered to clean the kitchen which was in a mess.  The pilgrims cook their own meals and have to clean up afterwards, but yes, that obviously was not a priority. We then had the standard breakfast of toast fresh pulped tomato with garlic, olive oil, fresh orange juice and boiled milk coffee. 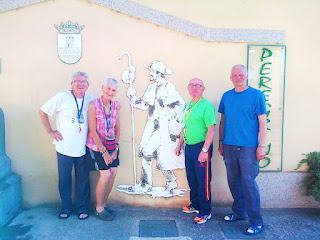 I just started with my duties straight away and they did their part. Valdimer was in charge of the washing of the bed covers/pillowslips and everything else  to go in and he tidied the beds, swept the dormitory.
I also mopped the dining room floors. The rest was Mariano, Antonia & Maria's job.  By +/- 11:00 am we were finished.  They went on outings, I stayed and did my own thing. It was difficult if they did not speak English. Vladimer was polished and could speak a little English.
They took me sight seeing the first day and lunch was free at one of the restaurants  allocated by the owner, but the men made their own lunch and by that time it was 2:00pm, intake of pilgrims (usually +/- 90), the kitchen was a mess because I had to clean up before we start the admin side. I had to let the pilgrims in, made them feel welcome, try and get order out of the chaos because space was limited.

Mariano, Antonio, Maria did the booking in and Vladimer got to allocate and show pilgrims their beds. Believe me,  not an easy task with so many, and all 45 double bunks in one big dormitory.
Mariano slept in the corner on a bottom bunk in the dormitory and Antonio & Vladimer had the laundry room with a double bunk.
When Maria left, Theo a Mexican who could speak English / Spanish took over from her, he was nice.
Mariano and Antonio left on the 14th May and Robin Pardy (Canadian) arrived , she also spoke English/ Spanish and we clicked straight away. She took over Vladimers duties. Then Nunsie, the elderly Italian lady came. She could not speak English and very little Spanish, only Italian. She smoked and did not want to do it outside.  We had a rough time with her. We could never figure out what she was up to. She and Robin really went at each other.  She also had to share Theo's room, no other way.  Theo did not mind, and it worked out okay.
The weather was up and down, quite cold and some rain too. I had to dig in the pilgrims basket for a man's fleece jacket, because I did not take warm clothes. a pair of walking poles were left behind and I borrowed them as well, because I could not fit mine into my backpack.
The washing was done on a rotating system, where 3 pairs of bedcover/pillow slips per day had to be washed within a 15 day period and then start all over again. Space and washing machines were just not enough, but it worked out okay.
Many pilgrims were Taiwanese and Korean.  One evening we were woken by a drunk Korean guy who had not booked in, but we could not turn him away, so we made a bed on the floor, just in case he fell out of the bunk.
Another night, Robin got up, just to find 2 pilgrims having sex on one of the dining room tables, stark naked.  She was furious and they were upset because she chased them to their beds.
There were 4 gypsy's with their dogs. We allowed them to shower, gave them food and the police took them to the campsite to sleep the night, we could not accommodate the dogs.
Every scenario that was discussed and role played during the hospitalero course, had been thrown at us.  The owner Antonio, his wife and other family members came every night to collect the donations and leave money in the kitty box. They were very supportive/ generous and kind.
On Saturday/Sunday, we had a cleaning lady and we could go and do our own thing until 2:00pm.  One day Robin and I walked to Asofra, +/- 13km and back to have coffee (next town on our Camin trip). I loved to go for long hikes around Najera.  There was a little coffee shop in the Square by the church, where I got free wifi and also sent my Whatsapps. We had great fun in the evenings, with music and singing, the pilgrims loved that.
On the 21st May, Vladimer left and Manual arrived, he played the guitar and there was an American girl who did the singing that night.  It was a great party and at 10:00pm I could finally close the kitchen door, but it was not any easy task, as with the cooking and cleaning, I had the responsibility of letting it flow smoothly.
A Taiwanese mother cooked up a feast, but used the kitchen for 2 hours, I had to ask her to please hurry, as pilgrims were queuing already. Shame she gave me a packet of oranges afterwards. 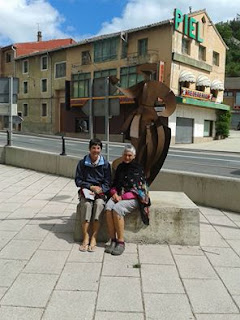 The next day, the 22nd May, Robin and I were both feeling down and tearful. I hated the idea of leaving my good friend behind for another week in Nunsie's company. I did went back and said hello when our group stayed over in Najera the 24th May on our "Complete your Camino" walk.
I do want to stress that learning to speak Spanish will help a lot with communication. I was thrown into the deep end on my first hospitalero assignment and would definitely try again.
I learned a lot about myself, how to handle difficult situations and to cope with it.
Najera was a great experience and I enjoyed being a small part of it.
The reason for the weekly overlap and change of the hospitalero's was that I started on the 8th of the month and not on the 1st or the 15th, which is the normal way.
Anna Kapp
Posted by Sil at 6:16 AM